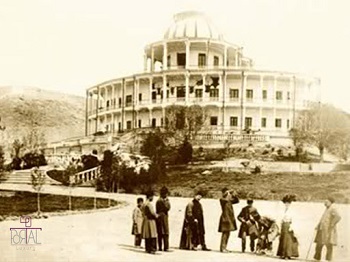 Kaykhosrow Shahrokh, who was then the chairman of Tehran Zoroastrian Association (15th turn), he wrote in his memoirs: “We are thinking of providing a suitable place. I wish it was as if I was buying a new place and it’s called after my wife, the late Firoozeh, and I offered it to the community. “

Kaykhosrow’s wife, Firrozeh, Karimdad Farahi’s daughter, who died close to that time, was always praised due to her dedication and kindness by Kaykhosrow. However, by the meeting notes of Tehran Zoroastrian Association (Anjoman) the best suggestions were Sulaimaniya, and Ghasre Firoozeh more than elsewhere, and they were considered to be appropriate. Keikhosrow in the same diary, wrote: “In one day in 1935 (1314 solar) that the group went to the south of Tehran, Sulaymaniyah, my eyes fell to the foot of the hill lush pasture. When asked where is there? They Said: Ghasre Firoozeh. We went up the hill, I saw the old palace building, with its strong and beautiful tiling walls. Two white and two large ponds, and on the other hand, there is a garden covered with trees visible. A milestone of land (about 6 km) long and was a part of royal hunting. It was surrounded by mountains on three sides. The landscape was very beautiful. From there the whole Tehran and all Shemiranat was seen. “

The Palace that Kaykhosrow mentioned, was built by order of Shah Qajar and its architecture was an adaptation from a French palace in Paris. The building was in the form of semicircle with a few rows of balconies around the building. Each floor had a central room and several other rooms. This palace was a place of rest and dining Qajar kings until Mohammad Ali Shah when the palace was forgotten. But at the time of Ahmad Shah (the last Qajar Shah) was re-organized and the inner structure was added.

However, Kaykhosrow’s diary continues: “After returning to Tehran, I began to query because they liked it. First, my wish was fulfilled. Because it was in the name of Firoozeh my late wife. Second, since the distance from Tehran, was less than 10 Km. Third, this place on the perch on the hillside was appropriate for cemetery usage. Fourth, if necessary, could be extended. “

The tradition that a woman’s name is given to a cemetery was observed before that in the history of the Zoroastrian community. For example, Golestanbanu, Izadyar Kermani’s daughter, who died in 1234 Yazdgerdi in India: in recognition of the services and efficiency measures that she had carried out her name  was given to several cemeteries and towers of silence.

Friday 16th Khordad, 1313 (solar), Tehran Zoroastrians Association (Anjoman) decided to purchase Ghasre Firoozeh to be used as a cemetery. The next day Kaykhosrow (The chairman of Anjoman) went to meet Ali Akbar Davar, Minister of Finance, and to tell him his request: to purchase the land. Davar accepts his request and agrees to reflect his request to Reza Shah, the king of Iran at that time. Shortly thereafter, the government and the finance minister ordered in agreement with Anjoman’s request to sell the land and started its legal and paperwork process. But the problem was that the price was so high and the Anjoman couldn’t pay the whole to the government.

Kaykhosrow writes, “The first price was very high. I told Mr. Davar we cannot afford such high price and the amount must be collected from the Zoroastrian community, and I do not think it is feasible to provide such a sum. Therefore, we will not get to our desires. But the government finally allowed our wish being fulfilled, and the price of 15 thousands Tooman was set. So half of the price was paid in cash and the remnants during one year thereafter. My name was written on the legal document of proprietorship. The first half was paid in cash by me and a number of members of the Anjoman’s board and the Zoroastrian community also are asked to help on the remainder. “

Thus finally the land of Ghasre Firoozeh was purchased to create a Zoroastrian cemetery and later on to add a village settled by Zoroastrians.

The first legal document was registered in the name of Kaykhosrow Shahrokh, then he dedicated it as a whole to the Zoroastrian community.

The extent of land, based on this document, 27 million square meters run by the North and East (: East) Mountains Sorkhehesar and from the West to the river originating from the northern mountains and the river opposite military camp.

The Zoroastrian made two aqueducts under the ground that one is specific to the cemetery and its surrounding gardens and the other for agricultural purposes.

Kaykhosrow writes about how the land is purchased, “at a meeting of the Anjoman, nearly 300 people were present. I asked them to discuss about the new Zoroastrian cemetery in Ghasre Firoozeh. White papers was given to them and the subject of help was announced. Fortunately, nearly 23 thousands Tooman were collected. Some, agreed to build new buildings there. After the final approval of the purchase of land, at a special meeting, I transferred the whole ownership of all the legal documents to the Zoroastrian population (of the world) with trusteeship of Tehran Zoroastrian Association (Anjoman). “

Based on the document written and signed at a meeting of Tehran Zoroastrian Association (Anjoman), then, the main shares for this land was divided as below:

Ghasre Firoozeh’s land was completely paid for, 1314 (Solar year) and the new proprietary document was registered under number 5137 at the ministry of finance, and the document which shows this land is devoted (VAGHF) to Zoroastrian society (of the world) bears the number 7249 dated 28 Aban, 1315 (Solar). Tehran Zoroastrian Association (Anjoman) was assigned as the trustee for this devoted land at this document.

۲۰ thousands square meters of this land was prepared to be the cemetery. This piece of land was divided into 7 pieces. Many trees were implanted. Khodadad Sirousi, Rostam Giv, Rostam Abadian, Mehraban Parsi and others paid to build several buildings with different purposes on this part of land.

۶- Oral presentation of Katayoun Mazdapour, PhD, at the memorial meeting for Kaykhosrow Shahrokh, The society of cultural works and honors, 1387

Free translation by Dr. Kayghobaad Behdin from an article written by Eng. M. Khosraviani in Persian; the original article may be found at below link

Translator’s note: It is decades that the armed forces of the Islamic republic of Iran has taken a large extent of this land and do not even pay the rental. This is while, as per the regulations of Iran and Islam, assigned by themselves, any kind of taking the properties which are legally devoted is forbidden and is not Halal!! 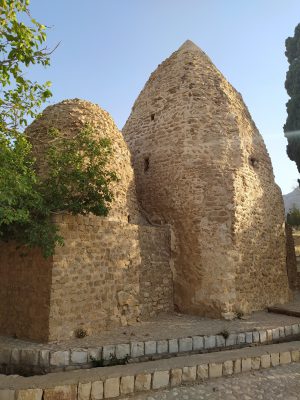